The culmination of the season 2007 was of course the title of 1e Prov. Ace Pigeon Yearlings 2007 with their “Sultan Bakhsh”, a title that you don't win every year, that was a place better than the 2 Prov. Ace Pigeon Middle Distance Old 2006 with the “NYS”.
It was in 2007 again looked forward to strengthening by purchases from the best pigeons from:
1e Wet. Camp. Belgium H. F. 2007 Casaert-Senechal St-Army
2 Wet. Camp. Belgium Long Distance 2006 Hana P. and (D). Wortegem-Petegem
1e Wet. Camp. Belgium Long Distance 2006 Aelbrecht Marcel Lebbeke
Freddy Vandenheede Zingem, that the rash in the Prov. ACE pigeons 2006 overwhelmed. 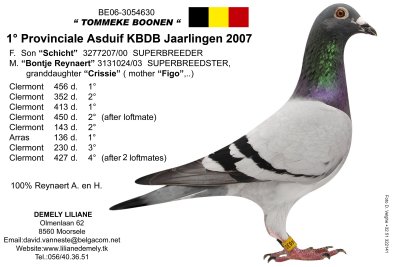 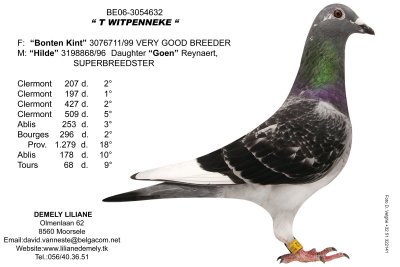 How it started…..
After the death of Father Gerard Vanneste sold all their pigeons were total. Gerard had 6 children, and each had to have his part. Two of those children ,Filip were pigeon fanciers and Stefaan. It was 1988 and it was one of the best auctions of the eighties. Son John ended up in football and spent all his spare time to. Son Filip, moved in 1989 to Moorsele and began in 1990 to play again with the pigeons, together with his wife Liliane and son David. Filip and David who have a family business in interior decoration are during the day on their work and then Jack takes under her wing pigeons. Therefore it was decided to continue playing under her name. 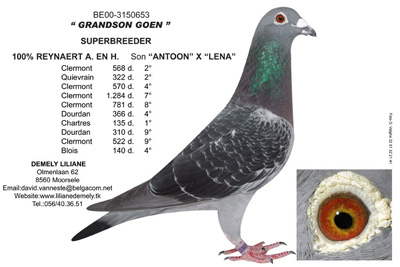 There were pigeons purchased in 1989 at the strongest milkers from the province. There was a round boy from bred, and between that boy was an instant super pigeon, NL. the Jacko, was in 2000 2e Prov. ACE pigeon with small percent on the middle distance. The first 2 boy look like were very good. The Jacko II flew as young 6 first prizes, the Jacko I won many top prizes and flew as old pigeon 1st Prov. Blois Old. The Jacko is unfortunately early died when one day he fell down on roof, later a poisoning which he had incurred on a field not far next door.

The 4 following years they played very strongly with old and boy on the middle distance, with the Super pigeon “The Provincial”. With 8 first prizes on the middle distance, with oa 1 Prov. Tours of more than 2000 pigeons. But the offspring brought no longer results as before, There was decided to get reinforcement at again. One of the best players at that time was Rad Antoon from Passendale. One had heard much talk about his strong play and Super pigeon the GALE. When she got an eye that they also the Prov. ACE pigeon middle distance had with their Super crack with 10 first prizes was there contacted Abbasi Rad. There were boy ordered straight from the Gale x Wendy and from 2 sons of the Gale. The boy of the third round were 1996. There was careful a round boy grown for 1997. They had 6 boy from these pigeons and there was already a hen at that very good flew as young, but super as a yearling and old pigeon with 8 first prizes as a result.
These came from Klz Gale x daughter Gale or Antoon 873/96 x Hilde 868/96. 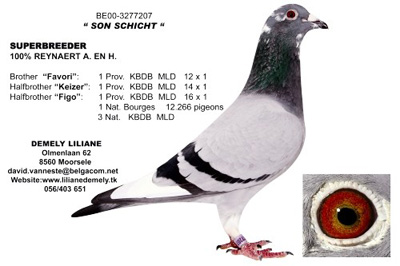 This Antoon is father of 11 several first prize together with the kites 2 daughters of the Gale , Hilde and Lena. Also with other birds breeding with Hilde and Lena is very good, they had left. Because they are so well were, are they something go dragging in every year from the toppers of Loft Race.
In 2000 oa came a son of the Flash x the Wendy. The Flash is a phenomenal grower and is father of 3 Prov. ACE birds including the Favori (12 x 1) – Emperor ( 14 x 1) – FIGO (16 x 1 and 1 Wet. Bourges Old) and also father of the small Figo of Baloch which in turn father of the Cannibal and Church Dove ( 1 Wet. Le Mans by more than 120000 (d).)

The Wendy is mother of 2 Prov. ACE pigeons; the Super crack and the Favori. Meanwhile, the Hilde and Lena very good sires, first prize in the third generation to all kites !!! Meanwhile, with the Fam. Rachel a close bond of friendship has grown. On their breeding loft are now also 5 Grandsons Figo, 5 granddaughters Gale, pigeons from brothers Figo, klz Gale,… Their pigeons now consists of 70 % Rad (A). and H. supplemented with pigeons from best of best of
– Superman Casaert Maurice Néchin , 10 pigeons from their super breeders.
– Ally Norbert Aarsele very strong colony with mainly Gaby Vandenabeele pigeons
– Hebberecht Chris Evergem 1 Camp. Long distance in the long distance pigeon of Belgium and super
– Aaaa (A). and Vermeulen-Dujardin via a friend Andre Verheye Waregem.
– Kabi G. and (D).from Ooigem supplier of top pigeons,….. In short the best colonies of the Flanders.

Method Old and youngsters.
The widowers (every year around the 25 PCs) be linked at the beginning of december and bring each a couple boy large. If the boy the widowers are going back to the speenklaar voliere laying around 15 March and then they come back on the fly pens. They may be once again 5 days brooding and weather permitting be taken away if they breed like once they. First 5, then 10, 15 Km and then they go with it mid April. 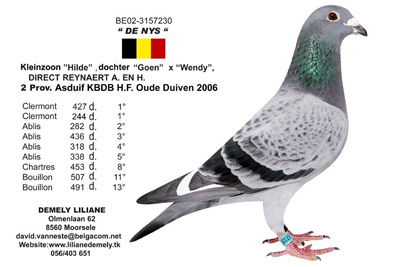 There is started on 70 km with the yearlings and on 170 Km with the old. The hens are normally shown for departure , but there is no hen will be shown after a check out time, even alternating won't hurt. Even the pigeons on the middle distance flights are, they go but to the 14 days. In very bad weather forecasts are normally the top ones left at home. But this does not happen much.
The game ends at the end of July with widowers.

Bring the widowers after the season a young large and then go back to the voliere to winter breeding.
There is also a small booth where there every year 7 hens are played (the best young hens are played further), These hens do no winter breeding and basketed with a young on the first flights in the dish. After three flights they are then further played on widowhood until end of July. These hens are locked in their woonbak to prevent mutual pairs. These hens are in the morning and evening for the widowers after the widowers elated. They train not really much, but go every week on the flights. In the beginning people were afraid the results would suffer from their lesser training during the week, but because the results are very good they look there now no longer go to. The widowers train until mid May right in the evening and this for 1 hours, After mid May 2 times per day. They see these pigeons like to train properly , If necessary, with ball and flag early in the season. Everything must be learned. The most attention goes through busy working conditions to the game with the widowers. The boy be darkened by 1 March to end of may, as it fits, but with the thought that it was about 9 hours completed per day. They are played to the system by their friend Maurice Casaert; they stay together until the end of June and then played with the sliding door in widowhood. There they begin early July is it hard to go against the boy to play already on the flights from the end of may. Still, the results this year with the boy very well and this despite the lesser experience compared to their peers. As the young cocks young saved and don't do much flights, certainly not in very bad weather. She needs that 4 – 5 flights show a few flashes to get on the weduwnaarshok, because there is not much place over.
In 2004-2005, 33 first prizes and 35 second rates and numerous Champion titles. OA 3 General Prov. Champion KBDB (4 entries in Prov. ACE pigeons) 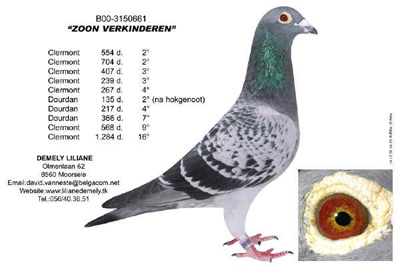 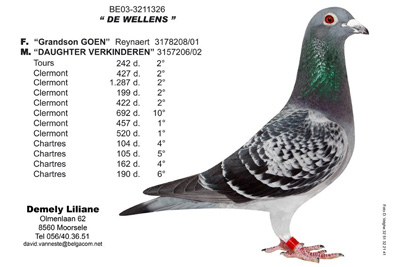